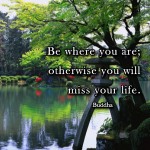 Thanksgiving can bring up lots of emotions due to seeing certain family members. There can be unresolved anger, jealousy around finances, sadness around illness in the family and many other dynamics. Sometimes the uncertainty about whether or not certain topics will be discussed can create a pins and needles feeling.

Try to keep an open mind and heart as people can change and we don’t want to assume that past behavior will repeat itself. Also, being at your highest level of awareness is the best way to approach a family situation as it will help you to not have your buttons pushed. It also can show family members you aren’t carrying a grudge or ready to pick a fight. Of course, there may be certain areas that are volatile that may need to be discussed later in the day or over the weekend which could also lead to a breakthrough.

Walking, meditation, quiet music or being in nature can be a good way to prepare your mind before seeing family. Sometimes we are closed from negative situations from the past. I read a good quote from Dr. Fred Luskin the other day on some of the blocks to forgiveness: “A lack of gratitude because then you think that it’s only bad things that have happened to you so you don’t have a good perspective. Second is a lack of compassion because then you think that bad things have only happened to you, and you don’t really notice all sorts of other people who have been hurt too. Third, being narcissistic makes forgiveness a problem because then you’re just concerned about you and not concerned about anybody else, which makes forgiveness almost impossible. And, fourth, a lack of practice. You have to practice forgiveness. If you practice hating people, then that’s what you get better at. If you don’t practice forgiveness, it’s really hard to do it.”

Byron Katie, Luskin and other therapists and teachers speak about how we buy into our stories and then we keep repeating them to ourselves. The stories do seem “objective”. “Dad never went to any of my games,” is something a client told me several months ago. One thing though that she started to see was that her dad had been criticized his whole life by his dad and was still living out that situation with his boss at work. That helped her to see the circle of concerns that dominated her dad’s life when she was growing up.

Take breaks if you need some separation over the holiday weekend. Going to another room, taking a walk or just doing a 3 minute meditation in the bathroom can be a way to change your perspective. Generally, no one will come in when you are in the bathroom, though with some families that may not be the case!

Jung says, “Everything that irritates us about others can lead us to a better understanding of ourselves.”

Goethe says, “Treat people as if they were what they ought to be and you help them to become what they are capable of being.”

Happy Thanksgiving and feel the gratitude for your health, wisdom and journey. The people who have helped us aren’t just the one’s that support us, but also those that may always be debating with us or the sandpaper in our lives. 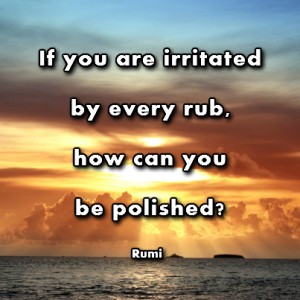 The spiritual teacher Gurdjieff had a community of students and there was one student that most of the students found very difficult to be around. He was obnoxious, in conflict with everyone and the opposite of people’s vision of a peaceful community. The student finally left and there was great relief. But, when Gurdjieff found out that he left, he was not happy. In fact, he paid him to return! Everyone else paid to be a student. Not only was he back, but he was getting paid to be there. When the students asked their teacher about this in frustration, he had a very deep reply: “ The man is like yeast for the bread, without him here you might not understand the meaning of patience, the meaning of loving-kindness or compassion. You would not learn how to deal with your own inner anger and irritation. So, I bring him here. You pay me to teach and I pay him to assist.”

Reflections on Habits
Reactions to a Spider Bite

I spoke with a client the other day who told me that she found her life has really changed by havingRead more...

How can you make a mistake when you breathe? After all, you've been able to survive this far! If yoRead more...